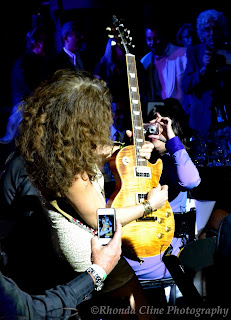 "LA Music Awards Nov.15, 2012- Deborah playing the crowd "                                                   Photo courtesy of Rhonda Cline Photography
It seems as if it were just yesterday when I was looking for an appropriate avenue to help me get my music out to the world & to the next level. I realized that I had to get back out in to the world & hunt it down because it certainly wasn't  happening the other way around, no matter how many hours I  spent marketing on social web media .
It was 2011 when I learned about & submitted my cd to the Los Angeles Music Awards.  I found out in early 2012 that I would be one of 7 of the over 10,000 acts submitted,  to play on the stage at the historic Hollywood Palace, now renamed The Avalon Theatre. I also found out that I'd be receiving "Producers Choice Award for Best Female Rock  Performer!"
I was very excited not only at the prospect of playing for successful music industry professionals. It was amazingly synchronistic that I'd be performing at this theatre formerly known as the Hollywood Palace, my former place of employment 30 years before! I was the front the door bouncer there in 1983-1984 !
I took the job not only to pay my rent on Santa Monica Beach, but to be close to established musicians & industry professionals. I'd stand at that front door taking tickets or fighting with unruly famous & wealthy patrons , gazing at the artists onstage inside the club wishing it was me on that stage.          I used to hope that an industry executive would engage in conversation, find out what a talent I was & make me a rock star!  Oy, dream on. Standing in one spot only grows rust & dust.
I will never regret the friendships made & the strength I gained to deal with any situation (getting jumped by 3 unhappy patrons being one of them & getting verbally abused every so often by some of the rich & famous, but after a while it was time to move on. It was about the time we started having to carry guns. $7/hr was not worth getting threatened everyday. Fast forward to 2012.


Last September - my Executive Assistant Suzanne Fava & I headed out to Hollywood for the LA Music Awards nominating party at The Whiskey A GoGo.  I was excited at the thought of returning to LA, but with a sprained, painful & swollen ankle. I looked up the metaphysical implications & it referred to not having enough joy & pleasure in ones life. Ok , that made sense. I've been working harder this year than ever before & did need to add more fun in my life.

The flight was long & we arrived as it grew dark, ankle throbbing from running to connecting flights.  Was flying ever fun? We arrived at my friends house, tired but excited. We reached the front door & my friend called to see where we were and to tell me he was on his way home.  The door was locked so he told us to go in the back door which he left open for us.  We did and I began to cook in order to make supper before he returned home from work as a "thank you" for having us.
I was making a delicious Italian dish with pasta & sauted broccoli in olive oil, the smell of garlic was everywhere! My friend who picked us up at the airport had left, Suzanne had gone to the grocery store. I sat for a moment while the water was boiling, admiring the upgrade they'd done in the condo in the last 10 yrs since I'd been there. My phone was on the charger since I arrived & I picked it up to check messages. There was a message from my friend. "Where are you? I think you're in the wrong house!"
Turns out I was in the wrong house! I had no idea  I called him freaking out just a bit & asked if I should leave a note with the food and he said they were quarreling with these people & they weren't very nice, so I begged him to come help me get our luggage out of there while I frantically cleaned.
If ever there was a "Lucy" moment in my life, that was it. I scrambled to clean pots & pans, utensils. By the way,  I threw every bit of food into plastic grocery store bags & tried to clean up as best I could. My mind was racing in a surreal sort of way. What would I say if they walked in ?!! "Hi! You've won a complimentary meal from Iron Chef & I'm your host/chef for the evening, straight from New York?" I pictured myself in handcuffs! OY!!
I cleaned as quickly and as best I could. I knew there were small things out of place like the herbs in the cupboard I'd used. I imagined the wife yelling at her husband or kids for leaving those things out of place. I had a mental chuckle & then thought , well thats what you get for leaving the back door open!!!     I then ran to my friends house, which was actually right next door. The buildings were exactly the same, same builder, identical except for the color. AND did I mention the back door WAS OPEN ?!!!  Jeez.
We sat down, totally out of breath, heart racing , laughing til it hurt & tears were flowing.  All of a sudden I sat up in shock & realized I'd left a fennel salad  in the refrigerator! This time Suzanne went with me. She grabbed a few pieces of trash & a cup I'd missed while I took broccoli stems out of the garbage, got the fennel salad & washed the bowl. The house was spotless when we arrived & we tried our best to leave it that way. So glad I didn't hop in the shower before starting dinner. OMGosh we fell asleep laughing so hard that night and for the rest of the weekend for that matter.
We had a great time at the Whiskey meeting other nominees/artists, making new friends, listening to music & visiting with old friends we hadn't seen in many years.  After we returned to Rochester I was going down my house stairs when I realized my ankle pain & swelling was completely gone. Magic? I don't think so, more like a remedy, the best belly laugh I've had in decades.

The main event , the LA Music Awards was held just a few days ago, Nov 15. We had an amazing time & had some life changing experiences.  I'll continue the adventure in my next post.
Questions? Similar adventures? Have you ever gone in to the wrong house & cooked a meal in a strangers kitchen? LMK -  idiocy loves company.:) LOL
Still laughing - the BEST medicine of all !