The Declaration of Independence - History repeats itself once again

Happy Declaration of Independence Day !!
Wishing You Freedom, Happiness, Peace & Abundance as yet to come for many, as the American Bill of Rights is literally no longer, and a "a decent respect to the opinions of mankind" no longer exists among our ruling class......here is a reminder of where we were and where we stand now, read excerpts from the original Declaration of Independence below & the then Peoples plan to action, to see.....as history repeats itself , to our dismay,once again.
Wishing You Everything you ask for,
:Deborah 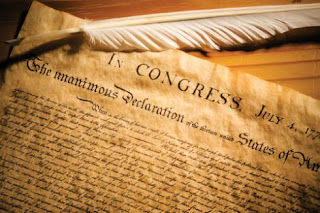 "We hold these truths to be self-evident, that all men are created equal, that they are endowed by their Creator with certain unalienable Rights, that among these are Life, Liberty and the pursuit of Happiness.
For imposing Taxes on us without our Consent:
For depriving us in many cases, of the benefit of Trial by Jury:
For transporting us beyond Seas to be tried for pretended offences:

For taking away our Charters, (BILL of Rights)  abolishing our most valuable Laws and altering fundamentally the Forms of our Governments:

He has erected a multitude of New Offices, and sent hither swarms of Officers to harass our people and eat out their substance.

He has plundered our seas, ravaged our coasts, burnt our towns, and destroyed the lives of our people.
He is at this time transporting large Armies of foreign Mercenaries to compleat the works of death, desolation, and tyranny, already begun with circumstances of Cruelty & Perfidy scarcely paralleled in the most barbarous ages, and totally unworthy the Head of a civilized nation.
He has constrained our fellow Citizens taken Captive on the high Seas to bear Arms against their Country, to become the executioners of their friends and Brethren, or to fall themselves by their Hands.
He has excited domestic insurrections amongst us,
In every stage of these Oppressions We have Petitioned for Redress in the most humble terms: Our repeated Petitions have been answered only by repeated injury. A Prince, whose character is thus marked by every act which may define a Tyrant, is unfit to be the ruler of a free people.

He has forbidden his Governors to pass Laws of immediate and pressing importance, unless suspended in their operation till his Assent should be obtained; and when so suspended, he has utterly neglected to attend to them.
When in the Course of human events, it becomes necessary for one people to dissolve the political bands which have connected them with another, and to assume among the powers of the earth, the separate and equal station to which the Laws of Nature and of Nature's God entitle them, a decent respect to the opinions of mankind requires that they should declare the causes which impel them to the separation."
Posted by Deborah Magone at 8:49 AM No comments: