Had the greatest experience today while shopping for ceramic tile for the kitchen floor.  I entered a store and actually found the color and tile I wanted.  I'd been searching for a while for something natural , stone with some yellow to give it warmth. Not easy but finally, there it was. While speaking to the clerk about details, we somehow started talking about music.
He told me about how he played guitar and taught his kids, who now have a band of their own. He's since slowed down with his playing a bit, however he's so very proud of his kids and you can see it and hear it in his expression.
I told him that I also played. He continued talking, about music and about the tile. The conversation was intertwined, back and forth. Then
he looked at me and asked if I'd ever worked at the House Of Guitars. No sooner did I say "Yes," then he snapped his fingers , pointed at me and excitedly blurted out " You were my guitar teacher! You taught me how to play Crazy Train !! YOU ROCK! "
I must've been around 19 and he was 15. LOL  He remembered how cool the lessons were and how I had complemented him on how fast he picked up the song. It was a happy experience for him.
In that moment I felt both very old and at the same time very proud to have influenced that young man, who then went on to teach his kids, who will one day go on to teach theirs or someone else's kids.
I had forgotten about him and he had remembered . I influenced his life and his future generations because I took the time to care and be respectful , and complimentary. I sincerely was, and still am when I teach . I love my students, I love my job.

Posted by Deborah Magone at 7:12 PM No comments:

The Death of Voting in America / Happy Veterans Day 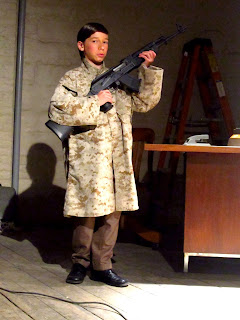 Last week I received a robo call regarding the Greece, NY School Districts desire to consolidate Polling places.  It shocked me. I'd been reading about this happening in other  communities around the country, and the world, especially in overly poor , democratic areas. It's a form of voter suppression, stopping or making it difficult for anyone who might upset the corporate agenda, from voicing their opinion. Just like they did eliminating cable access tv stations.  It had hit home, and to my great sadness, very few people in Greece, NY cared.

This is one issue in my mind, that is the last line of peaceful defense and dissent left to Americans, and now its disappearing. I felt I had to speak out so I did . There were a whole 4 of us. We had to sit and listen to the official, site all very feeble excuses for closing the polling places.  "It had become inconvenient to find help at the polls"and "It cost too much to pay them", but they didn't want to have to pay them anyway, so no matter, shut 'em down.
"It disrupts the school day for children", and removing things like Civics and the American Revolution from their history books just isn't enough , so lets remove all civic minded notions of engaging them in the voting process. So there, ...more intentional ignorance.
In Italy they say "the fish rots from the head down".
"Low voter turnout" but they don't want anyone to know whats going on anyway, so lets just  close the polling place in their neighborhood and have " no voter turnout".

As I spoke and watched their faces , all I could think was that today, you, the school board, will take away the freedom and convenience of voting from many of our citizens. You're very smug and confident.  But by allowing voter suppression, making it difficult for civic engagement, you're putting the nail in your own coffin.  Because tomorrow, mayoral control will come to town, as it has to so many other cities in America, and you the School Board will no longer be needed either, and there will be no one left who cares, to fight for you.

Below is a copy of my 4mins. I had to do a quick edit when I found out we only had 3 mins tops. This was my intended speech in its entirety.

GOOD EVENING & THANK YOU FOR THIS OPPORTUNITY TO SPEAK ON THE SUBJECT OF CONSOLIDATING POLLING PLACES.

MY NAME IS DEBORAH MAGONE-FRAGALE. I’M A REVEREND & A TEACHER.
I’VE BEEN A RESIDENT OF GREECE NY FOR 12 YRS and voting is one of the freedoms that Veterans fought for. (added  last minute in response to the meeting opening moment of silence for Veterans and the Freedoms they fought for)

THE FIRST QUESTION THAT COMES TO MY MIND IS :

1. WHO IS NTS DATA SERVICES? AND WHY HAS AN OUTSIDE COMPANY BEEN CALLED IN, BEFORE CALLING A MEETING WITH GREECE CITIZENS TO GET THEIR INPUT FIRST? AND WERE TAX DOLLARS SPENT ON CONSULTING FEES ?

2ND . WHY WOULD ANYONE WANT TO CONSOLIDATE POLLING PLACES MAKING IT MORE DIFFICULT & INCONVENIENT FOR VOTERS TO GET TO THE POLLS    ESPECIALLY SENIORS AND LOW INCOME W/ NO TRANSPORTATION? IN OTHER PLACES THIS HAS HAPPENED AND CREATED IMPOSSIBLE CIRCUMSTANCES & LONG LINES FOR NUMEROUS COMMUNITIES ACROSS THE COUNTRY.

3RD .  WHY ARE CHURCHES EVEN BEING CONSIDERED AS POLLING PLACE ALTERNATIVES?
THIS SHOULDN’T EVEN BE AN OPTION, CONSIDERING THE  SCANDAL & INTERNATIONAL CLIMATE RIGHT NOW,  REGARDING GREECE,NY ‘S LACK OF RECOGNITION OF THE CONSTITUIONAL SEPARATION BETWEEN CHURCH AND STATE.
EVEN AS A REVEREND , THIS IS SOMETHING I MYSELF AM VERY CONSCIOUS OF.  I’M VERY UNCOMFORTABLE WALKING IN TO SOMEONE ELSES PRIVATE HOUSE OF WORSHIP TO VOTE ON SUPPOSEDLY PUBLIC POLICY, & CANDIDATES.

ALSO PUBLIC TAXPAYER FUNDS WILL BE PAID TO WHOMEVER HOSTS THE POLLING.
I’D PREFER TO SEE MY TAX DOLLARS GOING TO SCHOOLS, FRIEHOUSES & POLICE STATIONS , EVEN CITY HALL TO PROVIDE MUCH NEEDED PUBLIC SERVICES.

RESEARCH BY STANFORD, MIT & OTHER POLITICAL SCIENCE PROFESSIONALS ACROSS THE COUNTRY, WHO BY THE WAY I WOULD TRUST MORE THAN AN OUTSIDE, FOR PROFIT DATA SERVICE,  HAVE FOUND THAT
THAT IN FACT, "THE INFLUENCE OF POLLING LOCATION ON VOTING (E.G., CHURCH WITH AN ANTI-GAY AGENDA) WOULD BE MORE THAN ENOUGH TO CHANGE THE OUTCOME OF A CLOSE ELECTION.

THESE SAME RESEARCHERS HAVE ALSO FOUND THAT EVEN A SMALL INCREASE IN THE DISTANCE BETWEEN HOME & THE BALLOT BOX CAUSES A SIGNIFICANT DECLINE IN THE LIKELIHOOD THAT AN INDIVIDUAL WILL SHOW UP ON ELECTION DAY.

NOW, I UNDERSTAND VOTER TURNOUT HAS BEEN LOW.
SHOULDN’T EVERYONES EFFORTS AND MONEY GO INTO LOOKING FOR WAYS TO INCREASE CIVIC RESPONSIBILITY TO VOTE,  INSTEAD OF TAKING IT AWAY ?
HAVING POLLING IN SCHOOLS IS A GREAT WAY TO TEACH OUR CHILDREN, INSTEAD OF TAKING THE AMERICAN REVOLUTION AND CIVICS OUT OF THE BOOKS AND CURRICULUM , AS IS HAPPENING NOW, I’M BEING TOLD BY TEACHERS .

SAFETY , PARKING  AND ACCESSIBILTY HAV BEEN CITED AS REASONS FOR THE CONSOLIDATION.
I SEE NO LACK OF PARKING, SAFETY OR ACCESSIBILTY IN GREECE SCHOOLS OR PUBLIC FACILITIES.

I FAIL TO SEE HOW CHURCHES WOULD BE MORE SECURE. BUT I CAN SEE HOW THEY WOULD INTIMIDATE VOTERS. OTHERWISE THE ABSENTEE BALLOT ENVELOPE WOULD NOT ASK THE QUESTION “ARE YOU VOTING ABSENTEE  BECAUSE YOUR POLLING PLACE IS A CHURCH?”
SAFETY ISSUES ARE EASILY FIXED, DAMAGING DEMOCRACY AND CREATING THE FEELING OF EXCLUSION, IS NOT .

IT WAS VERY INCONVENIENT FOR TOWN OFFICIALS TO HAVE PEOPLE SEEING DISSENSION AT TOWN MEETINGS SO THEY ELIMINATED THE CABLE           ACCESS STATION WHO REFUSED TO EDIT.
COULD IT BE THAT ITS ALSO INCONVENIENT TO HAVE PEOPLE VOTING IN LARGE NUMBERS, SO LETS ELIMINATE POLLING PLACES ? I have to wonder !

On past issues, by the time these public hearings come about, it means officials have usually made up their minds. If so, I hope its on the side of the citizens of Greece,NY and Democracy……….. THANK YOU
Posted by Deborah Magone at 7:00 PM 2 comments: